FASHION - James Laver was a museum curator for the Victoria and Albert Museum in London from the 1930s through the 1950s. Laver was also a fashion theorist and historian and having no other claim to fame he conceived of Laver’s Law — an attempt to make sense of the "fashion trend life cycle".


What is interesting is that James Laver's Law of Fashion's has become the standard by which clothes buyers now operate. ie. Stanley Marcus, the former president of Neiman Marcus, recounts in his rather boring memoir titled "Minding the Store" how Laver’s Law was used by Neiman Marcus clothes buyers in the late 1960’s.

At the time there was a heated debate on whether the trend for the next year would still be the mini skirt (which was the current fashion) or the longer midi skirt. Marcus recalls asking Laver point blank if the mini skirt was dead. Laver told him that the mini skirt had at least another 2 years to go... whereas other experts were saying the time for the midi skirt would be soon.

His forecast was right, the midi was a complete flop, many women continued to wear the miniskirt, and those who couldn’t or wouldn’t make up their minds went into the pants suit. Pants were bound to come, but the skirt-length controversy made pants acceptable at an accelerated rate.

The real and sheer brilliance of James Laver's Law of Fashion's timeline is that it can be applied to nearly all creative mediums — not just fashion but also art, design, architecture and even music. So called Smart or Current Fashion, doesn’t have a particular time frame attached to it. Something can be smart for 1 year or a even few years. It might not even be a trend, but a wave lasting generations, such as when bikinis were first introduced and became popular. 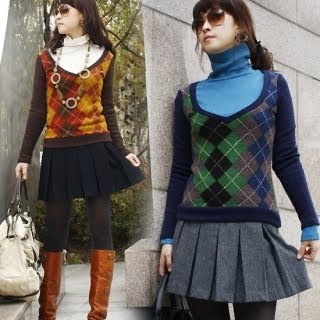 Now think back to some of the trendy things of the past and you’ll see how it applies: Brightly colored iMacs, Victorian wallpaper, Disco, Preppy clothes, stainless steel art deco appliances...

Hitting that sweet spot around Daring and Smart is what fashion designers are trying to design... because obviously they want to make a product that everyone will want to buy and it can be mass produced. Go shopping and look at all the stuff that in a few years will start to look bad.

In 10 years it will look horrible.

And then eventually your kids will raid your closet or attic and it will be hip again.

The FASHION SALON is accepting sponsors. Why? Because we're totally awesome and we can always use more shoes... and handbags... and shirts... jeans... you know, stuff!

Email suzannemacnevin{atsymbol}gmail.com and ask about our advertising and sponsorship rates.

Got an opinion on Fashion?

Want to get your view point to thousands of other fashionistas?

The FASHION SALON wants YOU!

Email suzannemacnevin{atsymbol}gmail.com and apply to become one of our fashion bloggers. It doesn't pay, but you get all the free buzz you want.